The intention of the Mg-Si detonation was to generate MgO-based abrasive products with varying levels of synthetic silicon carbide and, therefore, varying levels of abrasive performance.  We theorized that the high temperature carbon-producing detonation would provide sufficient pressure to cause some of the emerging carbon to bond with silicon to make silicon carbide.

That was a nice theory, however, XRD analysis did not identify any silicon carbide in the material we produced in this manner.  Instead, we saw magnesium silicate in the form of a mineral called Forsterite.

Through microscopy we learned that the addition of silicon to a CDP formulation produces particles with rougher edges when compared with material that comes from a carbon dioxide + magnesium detonation only.  Interestingly, when this byproduct is acid digested, the remaining material is a silica/nanodiamond composite that is so incredibly fine that a container of it behaves like liquid.

An ultrafine silica and nanodiamond composite powder is an excellent candidate for polishing specialty surfaces such as high-end luxury vehicles and boats.

We have performed in-house polishing tests on stainless steel items and discovered that the addition of silicon to a magnesium formulation certainly augments abrasive performance of the resulting powders.  Magnesium oxide has a hardness of about 5.5 and Forsterite has a hardness of 7.  By varying the level of silicon, we can explore a method to create a custom powder with a specific targeted overall hardness and friability.  This freedom of manufacturing control enables the production of abrasive products that deliver optimized polishing performance, customized for specific surfaces and desired material removal rates.

Here is the X-Ray Diffraction (XRD) pattern for the byproducts of detonation from a formulation comprised of magnesium, silicon and dry ice.  The resulting material is dark grey, very dense, very fine and we named it Mg-Si-3.2. 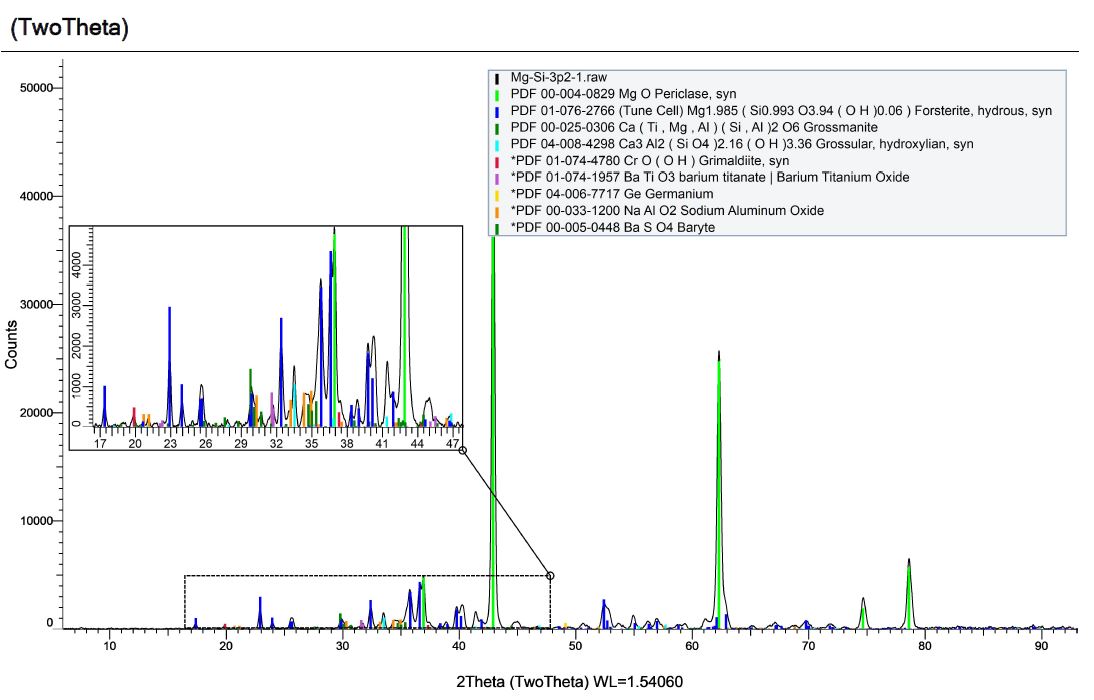 By comparison, here is the XRD pattern for the acid digested powder: 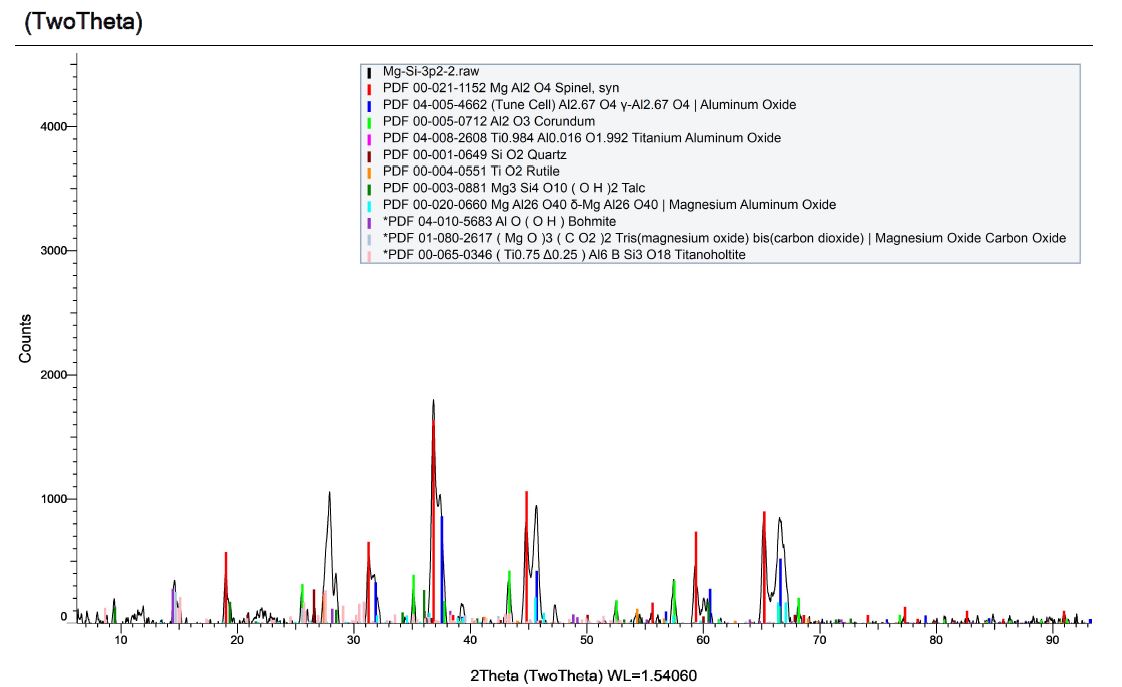 The new XRD pattern shows the expected removal of the MgO peaks, however, we also see the Grossmanite is missing and spinel as the main component of the resulting powder.  We also see varieties of aluminum oxide, which is not expected.  Despite being careful about contamination sources, the analysis of our acid-digested powders reveal peculiar contamination that implies magnesium oxide reacts with either aluminum or aluminum oxide during detonation to produce spinel.

We have already observed that the nanodiamond we produce cannot be detected using XRD due to particle size, surface chemistry and intimacy within dominant oxide phases.  Instead we can observe it with Carbon-13 NMR and by measuring lattice spacing with HR-TEM under the right instrument conditions.  XRD cannot report on amorphous materials, so if acid digestion of Forsterite produces amorphous silica, then we would not see any silica in this test.  By this same reasoning, if we produced amorphous silicon carbide, we would not see it either.  More testing is therefore required with this system.

Grossmanite contains a high level of aluminum, so it is possible that some of it reacts with freshly formed magnesium oxide to make spinel during detonation.  However, Grossmanite is not a reasonable crystalline structure to find within our system as either a contaminant or a byproduct of our process.  Regardless, XRD analysis reveals it is there.  Here is some interesting information on this compound as well as Forsterite:

Meteorites?  I researched Grossmanite and discovered that it has only ever been identified through the Allende Meteorite!  How could there be evidence of such a strange material in the byproducts of detonation when you consider we didn’t use titanium, calcium or aluminum in the detonatable system?  Under the scenario that we somehow contaminated our material with Grossmanite, the rarity of this mineral suggests that contamination is not reasonable.  Very interesting. 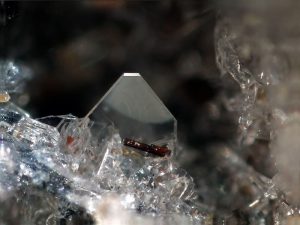 This material is also associated with meteorites as well as comet dust and dust around forming stars! We have speculated there may be something primordial about a dry ice detonation that cannot be reproduced with traditional explosive systems.  Going from cryogenic temperatures to thousands of degrees in a microsecond certainly seems like what might happen in a star when it bursts into nuclear fusion for the first time.  Cold to hot.  I think it is reasonable to assume that CDP’s unique set of detonation conditions might therefore be capable of producing unexpected results.

Regardless, here is an elemental analysis of Mg-Si-3.2 material after oven treatment at 450°C and acid digestion: 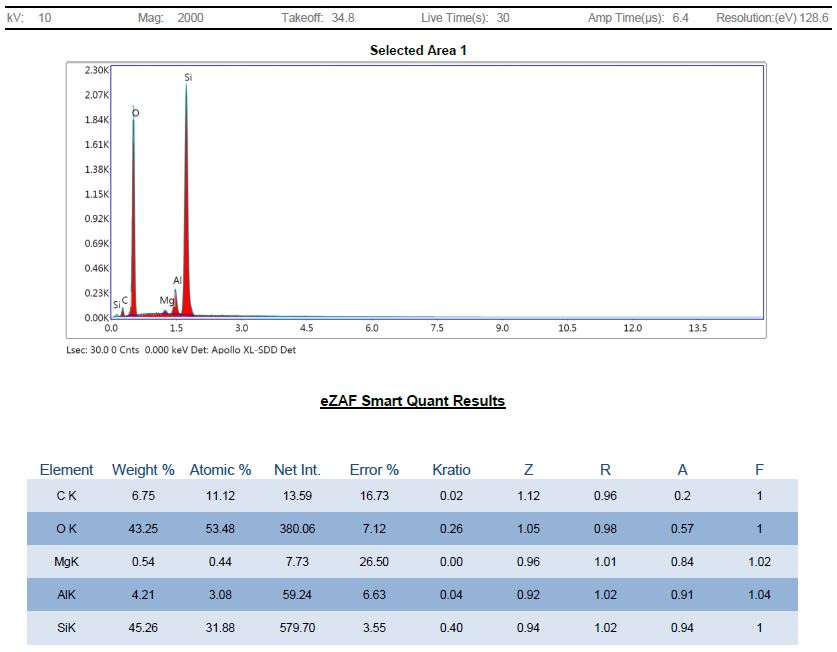 As expected, the analysis shows the silicon in Forsterite was converted into silicon dioxide and we now see the carbon level is over 6%.  This is the carbon that remained after a high temperature treatment step to thoroughly eliminate amorphous and volatile carbon phases, so it may be diamond, hard graphite or amorphous silicon carbide.  Also, it appears that all or most of the silicon was converted into amorphous silica, which dominates the elemental analysis yet does not show up in the XRD pattern, which makes sense.

Here is a high resolution HR-TEM picture of this material at 50,000 times magnification: 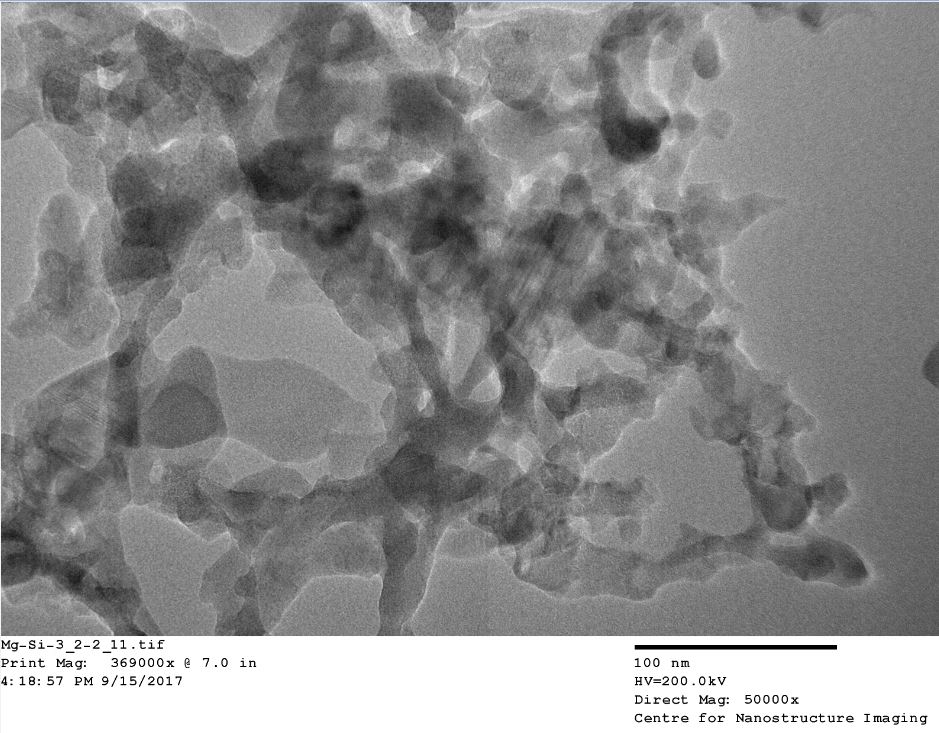