CDP explosives are intimate combinations of dry ice (frozen carbon dioxide), and reducing agents such as magnesium and aluminum.  Other materials, such as boron and silicon, may be added to augment the detonation.  CDP formulations are nitrogen-free carbon producing explosives that detonate with tremendous force, causing 50% – 70% of the mass to be converted into fine powders with remarkable properties.

EnviroDiamond’s priority is to produce CDP Abrasives, which are premium powders that are ideal for grinding and polishing in the manufacturing industry.  This is achieved by detonating CDP mixtures inside of a large blast chamber and collecting the materials that are produced.

However, CDP can be used as an explosive to do traditional blasting!

To blast with CDP, clients use an onsite system based on the technology.  The CDP Blaster system consists of a tank of compressed CO2 to make dry ice, a drum of powdered metal, and equipment that creates the mixture.  CDP mixture can be hand-scooped into tubes for small jobs or loading equipment can fill longer tubes or boreholes rapidly.

CDP mixtures are powdered, very cold, pack easily and can be customized to produce a wide range of blasting effects that can help reduce post-blast mineral processing costs.  CDP has several important features and benefits that sets it apart from traditional explosives.

The explosive has been successfully tested for blasting limestone under wet conditions (fully submerged).  CDP is 100% nitrogen-free, which means using CDP cannot produce toxic NOx gases (yellow or orange fumes).  The two best metals to use with CDP are magnesium or an alloy of magnesium/aluminum.  Detonation byproducts are mainly a combination of non-toxic metal oxides.

CDP has a velocity of detonation (VOD) of about 2,500 m/s, displays detonator-sensitivity across densities ranging from 0.6 to 0.8 g/cm3 and shoots across a wide range of metal concentrations.  Varying the density and metal content affects VOD and energy from about 3 – 5 kJ/g, which is consistent with traditional explosives.

Feature #1:  CDP explosives are detonatable across a range of metal concentrations, and each exhibits a unique VOD and solids yield.  This permits customers to prepare shots that deliver the perfect combination of energy, solids and gas necessary for a specific blasting objective.

One such objective is for blasting rock containing veins of high-grade ore.  Rather than obliterate the rock with energetically inefficient high velocity explosives, the customer can use CDP.  CDP can be customized, on site and with perfect ease, to deliver the ideal blend of explosive forces, solids and gas to produce rocks of a size that reduces mineral processing costs.

Mineral processing costs are reduced by creating rocks of a size that are statistically more likely to contain the highest purity of the high-grade ore in question.   Through simple techniques, the chunks of high-grade ore can be concentrated and subjected to a more efficient mineral extraction process due to less waste per tonne of ore.

Feature #2: The power of CDP slowly wanes over time as the dry ice portion sublimates.  This built-in safety feature means CDP explosives can be quarantined, in the case of a misfire for example, until the dry ice is gone and then the metal can be recovered (12 – 24 hours).

This feature requires the customer to plan their shots with as low a delay as possible between loading holes and shooting them (sleep time < 2 hours ideally; ASAP is best).   Longer sleep times are possible under the right insulation strategy and depending on the type of the rock.

Feature #3: The ingredients of CDP explosives are non-toxic and do not accumulate in workers from repeated exposure.  By comparison, all conventional explosives present serious potential health risks (including cancer) in their manufacture, handling, and use.

Feature #5:  CDP is completely safe to prepare, handle and use.  Substantial testing has shown that CDP formulation is safe against accidental detonation or fire induced by electric discharge, open flame, sparks, exposure to water, significant impact and extreme compaction.

Classification of CDP as an Explosive

The Canadian government has ruled that CDP may be prepared without a manufacturing license.  Despite CDP exhibiting detonator sensitivity, CDP has not been deemed necessary to be classified as an explosive by Canada’s Explosives Regulatory Division (ERD). 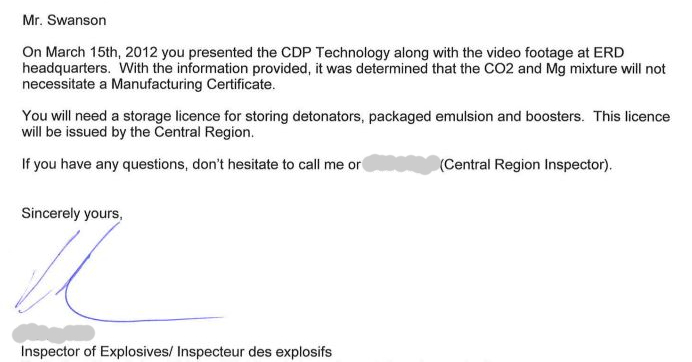